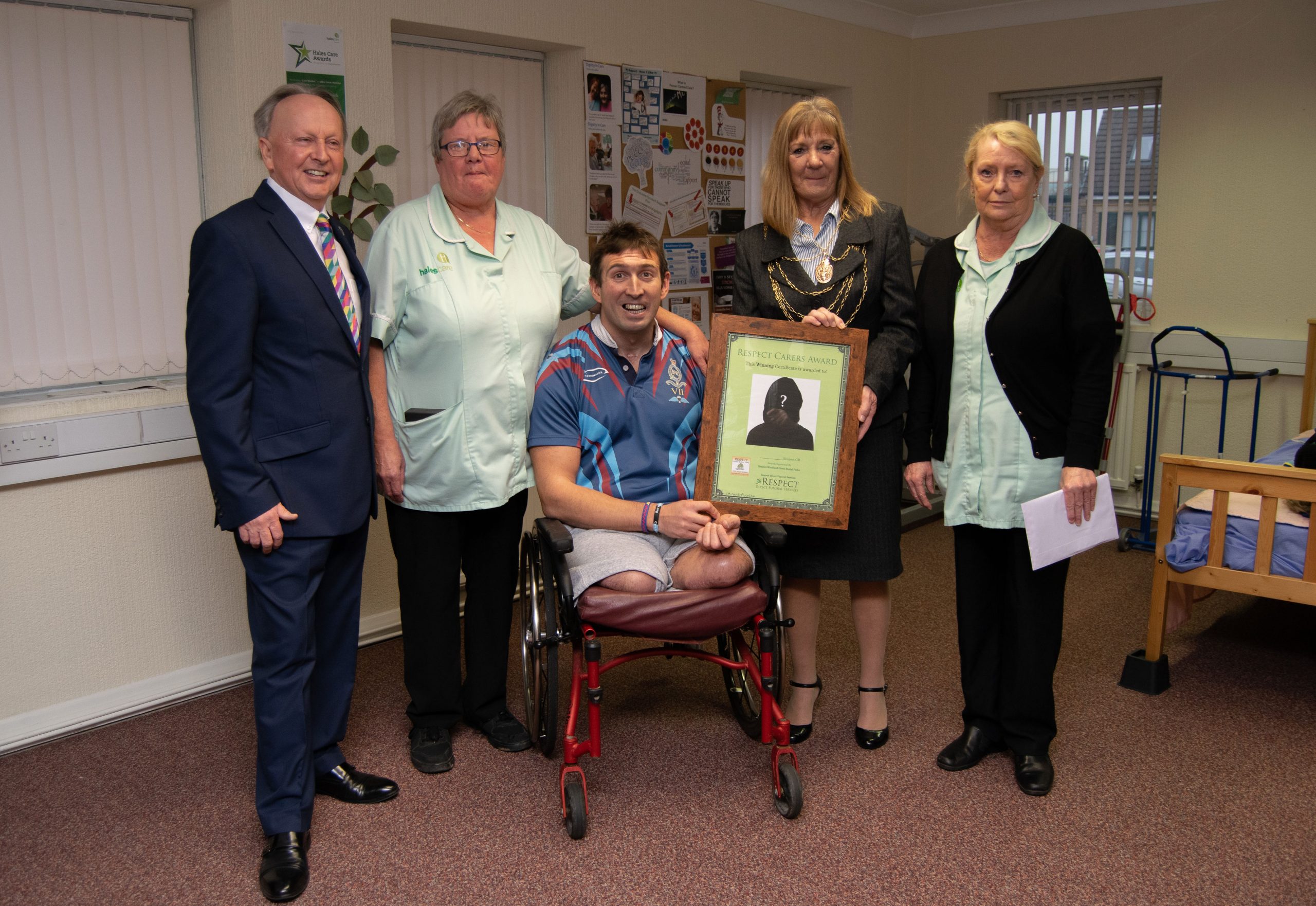 Hales Care Doncaster ended 2019 on a high after two of its care workers celebrated winning an award for Outstanding Care as part of the “Respect Carers Awards”, organised by Respect Green Burial Parks.

The awards aim to respect and recognise devoted care workers and un-sung heroes, including paid staff, unpaid volunteers and general caregivers. Award winners are then entered for a top regional Careers Award, which aims to promote the NCPC Dying Matters Palliative Care Campaign.

Both Ann Cannon and Kath Derbyshire of the Doncaster branch were presented with their awards on 19th December by veteran Ben Parkinson MBE during a ceremony that the Civic Mayor also attended.

Ann Cannon has worked in the industry for 16-17 years, two of which have been with Hales Home Care. Ann stated she was shocked and in disbelief that the family felt so appreciated of her care and help with the late Des Wilson, the former owner of the long-established Linfords Garage on South Parade in Doncaster.

Ann genuinely thought she was coming into the office to sort out the coming workload and did not expect to be presented with an award, saying that she was “truly Gobsmacked” and to top it all Ben Parkinson MBE and The Civic Mayor for Doncaster (2019/20) and Councillor Linda Curran took the time out to visit Hales Home Care regional office in Kirk Sandall.

Kath Derbyshire was also quite shocked and stated, “I never expected this, as you just do what you have to do when helping families look after their loved ones.”

Kath has worked at Hales Home Care for two years but has worked in the industry for over 18 years.

The nominations for both carers came from Jane Longley, the daughter of the late Des (Thomas) Wilson, who wrote in the following in the nomination:

“I had seen one of your awards in the Hospice when Dad was being looked after there. I told Gordon how good Dad’s carers had been and he suggested I could put them forward for your award. So, I would like to nominate Kath Derbyshire and Ann Cannon, they were Des (Thomas) Wilson’s carers from Hales Home Care. Kath and Ann gave my Dad excellent support and care, they were kind, listened to my Dad’s needs, addressing any issues that cropped up with ease and professionalism, nothing was too much trouble.”

“Dad had a very good sense of humour and him and Kath built up an excellent rapport, he was always pleased to see them walk through the door. Their kindness and genuine concern for Dad’s comfort made the time that my brother and I lived with and supported my Mum Dad so much easier because we could trust them absolutely to always do their best. They were always on our side; they were there the morning after Mum died and I was distraught telling Dad what had happened they stayed and comforted me even though they had a busy morning ahead.”

“After Mum died, they had been on a well-deserved holiday, and as soon as they found out about Dad being in the Hospice they came straight away to visit and even though he was very ill he knew it was them, and it made him happy to see them. They had become so important to me and such support I just cried as soon as I saw them, it was such a relief, I realised how much I had relied on them. Although they had to work on the day of Dad’s funeral, they called into the bungalow to pay their respects and share some time with us. My brother and I would have had a much more difficult time looking after Mum and Dad through this last year without Kath and Ann, they deal with many people at end of life and although they must try to not get involved to protect themselves they find themselves caring very much for the people they are looking after and is what makes them very deserving of recognition, they gave so much.”

Hales Home Care have 75 staff out in our region helping families 365 days per year and over 1,000 staff nationally through 24 regional branches. Hales Regional Manager Debbie Dennis came along to the presentation and explained she was extremely proud of Ann and Kath especially as this award came directly from the family of the person they had looked after.

COVID-19: Open letter from the Secretary of State to social care workforce

We are reassuring our clients and their families that our care staff are following the latest Government and Public Health England (PHE) coronavirus (COVID-19) guidance.