The Future of Care Roles

The care industry has faced a recruitment crisis for some time; an ageing workforce coupled with an ageing population creates an increased demand for social care, at the same time as current carers are retiring. By 2020, there is expected to be around 1.7 million job openings in health and social care and the mismatch in the supply and demand in the industry is projected to be one million employees – a 35% shortfall.

The looming Brexit move is leaving a question mark over the UK workforce; over the last three years, the number of EU nationals working in the UK’s social care system has increased by 40%. By September 2016, the figure stood at 92,000, and the system had started to become reliant on EU workers as it was already experiencing a recruitment issue. 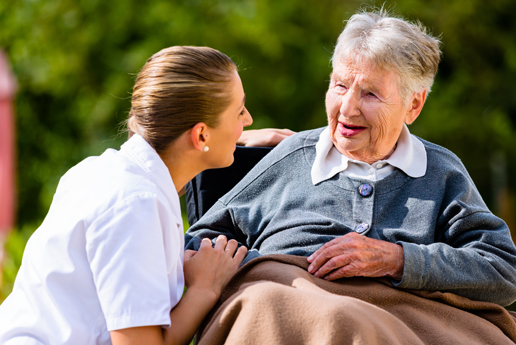 So, what does the future hold for care roles? Surely the advancement of technology and the problem-solving initiative favoured by the millennial generation means that there will be technology driven solutions created that will benefit the care system? And if so, what will this mean for carers?

While more than ten million UK workers are at risk of being replaced by robots in the next 15 years, it has been reported by the PwC that health and social care, along with education, are the two sectors that are the least threatened by advanced technology such as AI and robots, because of the high volume of tasks that are difficult to automate.

Although when it comes to robots, there are a number of emerging examples whereby they are being used for those who have suffered a physical injury and require physiotherapy. For example, a robot called Zora has been developed in Belgium; originally used to motivate children who have suffered an injury to move and exercise, it has since been used with elderly patients with impressive results.

Physiotherapists working nursing homes have reported that Zora proved to be a far more engaging element when maintaining the interest of a class, also freeing them up to help individuals without stopping the entire class. The Zora robot is now being trialled to see how it can improve the lives of those that suffer from dementia and Alzheimer’s. 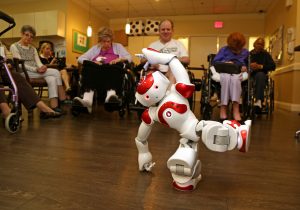 This technology could be something that goes a long way to improving the retention rates within the care sector. Currently, the estimated staff turnover rate in social care is 27.8%, as reported in the latest Skills for Care 2017 report, and it was reported this year that each day, 928 people leave their roles as carers; the reasons for this often came down to pay, zero-hour contracts and injuries sustained from work.

There have been apps created this year that enables self-employed care workers to connect with elderly people that want to continue to live in their own home, providing a new model to the traditional care sector, creating small eco-systems of care, and lessening the growing burden on local councils.

This of course, largely comes down to the agencies employing the care workers. Paul Burstow, a former care minister stated previously in the Key to Care report that, “We must make care work a career of esteem, where a living wage is paid, staff are trained and recognised as valued key workers who contribute a huge amount to society.”

The future of care is undoubtedly going to see technology sewn into its very fabric. In 2014, Skills for Care looked at the digital capabilities in adult social care, and it was revealed that 95% of those employed in the sector were already using some form of technology, and were positive about the potential that technology held when it came to the quality of care that can be delivered with efficiency.

Currently, it is about data gathering; and what those working in the sector need to do is stop viewing activities such as entering information regarding meals, medication and daily behaviours as an administrative duty. Instead, they need to fully understand the gravity that this technology has; not only does it make their role more efficient than using a paper system, allowing them to improve their quality of their care as less time is needed, but also that they are contributing to a wider network of intelligence, allowing the data to be used for further advancements, developments and efficiencies.

As the sector proves itself to be one that is digitally savvy, embracing the potential that technology will allow the next workforce to see how integral care roles are, not only to those who are in need of care now, but to the ongoing advancements in health and social care, where we predict that we will see an alignment and understanding.

It's Nutrition and Hydration Week. An annual event with a shared objective to highlight, promote and celebrate improvements in the provision of nutrition and hydration to all those in health and…

Hales Homecare is celebrating Mental Health Awareness Week. 🧠 🍃 💚 This year, the theme is Nature and how connecting with the natural world can support good mental health. 🌳…

Care workers from South Tyneside and Doncaster won £1,000 in February and March respectively after being named “Hales Superheroes”.

This website uses cookies to improve your experience while you navigate through the website. Out of these, the cookies that are categorized as necessary are stored on your browser as they are essential for the working of basic functionalities of the website. We also use third-party cookies that help us analyze and understand how you use this website. These cookies will be stored in your browser only with your consent. You also have the option to opt-out of these cookies. But opting out of some of these cookies may affect your browsing experience.
Necessary Always Enabled

Performance cookies are used to understand and analyze the key performance indexes of the website which helps in delivering a better user experience for the visitors.

Analytical cookies are used to understand how visitors interact with the website. These cookies help provide information on metrics the number of visitors, bounce rate, traffic source, etc.

Advertisement cookies are used to provide visitors with relevant ads and marketing campaigns. These cookies track visitors across websites and collect information to provide customized ads.

Other uncategorized cookies are those that are being analyzed and have not been classified into a category as yet.