The recent Size and Structure of the Adult Social Care Sector and Workforce in England report by Skills for Care has found that in 2016, the number of jobs in adult social care rose by 20,000 to an estimated 1.58 million.

One of the most interesting findings was the fact that just 18% of the workforce is male, highlighting the need for greater gender diversity in an industry which already sees an estimated 340,000 employees leave their job each year and is facing a labour shortage as levels of staff required exceeds supply.

If further challenges and barriers to recruitment and retention are to be avoided, then it is imperative that the care industry takes a more diverse approach to its recruitment strategy. 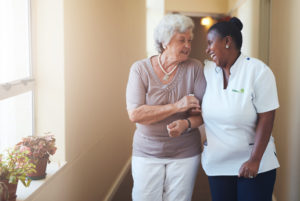 Despite movements towards greater gender diversity and awareness across a range of industries, stereotypes are often hard to redefine, and care is still seen by many as a ‘traditionally’ female role, both inside and outside of the home. From caring for children or elderly parents to working as a nurse on a ward – the role of care giving is one which is largely seen with a female face.

While many realise that the care industry and the role of providing care services is one which is not defined by gender, it has become a stereotype that the industry has been unable to shake off thus far. In fact, 90% of the National Health Service’s workforce is made up of females in nursing, midwifery and health visitor roles.

There are also gender stereotypes that need to be contended with. For example, there are often comments such as ‘men cannot cook or clean’, and in a role where these tasks need to be completed, there is an assumption that men simply wouldn’t be able to do these jobs. Which, of course, is untrue.

It is, therefore, an issue that care work as a whole is facing, be it in a hospital, in a care home or as a home care worker, the perception that women are care providers and men do not have the compassion or capability needs to be challenged if more male workers are to be recruited into the profession.

The Challenges to Male Recruitment 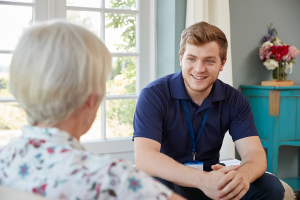 Chief Executive at Care England, Professor Martin Green, believes that the core values to social care include dignity, compassion, choice and respect – qualities which are applicable to both genders, therefore it is these attributes which need to be promoted when seeking to attract male applicants for vacant posts.

While the industry as a whole is actively recruiting younger talent to the profession, a study found that 25% of men aged between 16 and 25 would not consider becoming a carer. Although, a third of this figure said they did not know enough about the role, and 94% did agree that care was a suitable career choice for a man. These findings show that greater understanding of the care industry and the benefits and rewards it provides need to be promoted to individuals, and in particular to men if the gender imbalance in the industry is to be addressed.

A survey by Business in the Community found that 90% of employers that take a more inclusive approach to their recruitment and workforce have said that they have higher skill levels, enhanced reputation and improve staff morale. Proving that a gender-balanced workforce can improve other business areas too.

Care England has also said that with men living longer due to our ageing population, more male workers are needed to provide support. Having someone of the same gender providing care can be more beneficial to those who are perhaps uncomfortable having support from someone of the opposite sex with activities such as bathing and dressing.

Another example is whereby those receiving care become challenging, and often having a male or someone of the same gender can help to diffuse the situation and open up lines of communication.

Across the care industry, initiatives are being implemented to improve gender equality in the industry and attract more male workers to the sector.

For example, I Care ambassadors introduced a drive to highlight male workers in the care industry by giving talks and insights into as a care professional. Research later found that 93% said that they had a better understanding of the social care industry, with 35% interested in pursuing a career in this area.

As mentioned earlier there is a drive for the industry as a whole to recruit younger workers into the sector, and the NHS is actively promoting care opportunities to school leavers and work experience students in order to challenge preconceptions before they set in.

Coventry University has also provided a £10,000 bursary over three-years to 10 male students studying a health-related degree in order to entice men into studying a degree which can be used in the care profession.
Then there are recruitment firms who are targeting men specifically with advertisements on social media to promote the opportunities available in the care industry. Positions which they may have been previously unaware of unless they were targeted.

While it is clear that the care industry needs to recruit and retain talent of both genders if it is to meet rising demands, it also needs to address the gender inequality that exists in the care sector. The care workforce currently relies upon female workers, but if the sector as a whole works together to drive male orientated initiatives and breaks the stereotypes attached to these roles, then the current 18% of male workers in the industry should increase.

Please join us in congratulating two of our incredible care assistants as they celebrate years of service at Hales Homecare. 🌟 Georgina (Peterborough) – Jubilee Care Heroes Award & 10…

A lovely day celebrating some of our long service award winners in Grimsby! Hales Homecare are extremely proud to work with such a wonderful group of caring professionals. Congratulations and…

This website uses cookies to improve your experience while you navigate through the website. Out of these, the cookies that are categorized as necessary are stored on your browser as they are essential for the working of basic functionalities of the website. We also use third-party cookies that help us analyze and understand how you use this website. These cookies will be stored in your browser only with your consent. You also have the option to opt-out of these cookies. But opting out of some of these cookies may affect your browsing experience.
Necessary Always Enabled
Necessary cookies are absolutely essential for the website to function properly. These cookies ensure basic functionalities and security features of the website, anonymously.
Functional
Functional cookies help to perform certain functionalities like sharing the content of the website on social media platforms, collect feedbacks, and other third-party features.
Performance
Performance cookies are used to understand and analyze the key performance indexes of the website which helps in delivering a better user experience for the visitors.
Analytics
Analytical cookies are used to understand how visitors interact with the website. These cookies help provide information on metrics the number of visitors, bounce rate, traffic source, etc.
Advertisement
Advertisement cookies are used to provide visitors with relevant ads and marketing campaigns. These cookies track visitors across websites and collect information to provide customized ads.
Others
Other uncategorized cookies are those that are being analyzed and have not been classified into a category as yet.
SAVE & ACCEPT